I have strange notions. One notion is that Gordon and Deb should get all the things they want out of life. We did share the grande sacrament of Teacup Vaulderie together, after all. Less blood though, and more gin. Mostly they wish for things that are reasonably sensible things that would cause little harm and a great deal of fun. 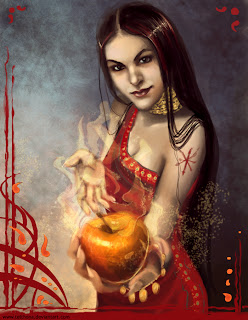 When Gordon trotted out the term Neotheosophy I was stoked! What fun! Let's play around with this and see what it looks like when we are done, shall we? If anything can be said about me, I'll try just about anything twice. As a Nath in the American Nath Society, I totally dig the vibe. We tend to not take ourselves so seriously.

Speaking of seriously, apparently in Theosophical circles Neo Theosophy has already been made a derogatory term for the less pure teachings of Leadbeater and Besant, and anyone not Blavatsky. Oh Fundamentalism. You are no fun at all. Which you know.. is hillarious considering some of the immensely non cannon things that the Theosophists believe. Evil Drukpas! Mountain Mahatmas! Luckily they are very Indo-focused and India has a history of tolerance.

I've got no problem with the non cannon bits, but it is a bit like saying that someone else fan fiction is totally WRONG, because those characters would NEVER do that. EVER. But YOUR Harry/Snape/Hermione three way is TOTALLY PLAUSIBLE! Everyone can have their own headcanon. All Gnosis is UPG until you can Verify it. Verification can be pretty easy. It doesn't take a few televised celebrities and a stage magician to verify these things. We just use the scientific METHOD.

We just did a thing. What the hell happened? Can we repeat it?

Honestly, that is all a spiritual tradition is. THAT is it's veracity. It doesn't matter if it's from Merlin, or Sai Baba, or Eris. Does it work? How does it work? The rest is just exposition.

We can't be afraid to get weird up in here. The world is waaaay weirder than we can even imagine. Don't be afraid to think outside the box and try whatever works. Building a new framework out of bits and pieces that you find is a time honored Occult tradition. As a Spiritual Dumpster Diver myself I pride myself on it.

If I only stuck to established formulae, and only worked within the confines of a particular tradition I wouldn't have had nearly the breadth of experience I've had. I've generally had a hard time working the systems of others and having them actually work without me taking them apart and tinkering with them. Cross pollination and mixing have always been ways that practice evolves. Everything is from somewhere, and some things don't work everywhere unless you MAKE them work.

Stand up! Get Weird! Build something NEW! The world is changing, and pretty damn quick. We've got to be ready to change with the times, and admit new information, new findings, and be willing to put the blinders of previous ages down in order to see things as they are.

We also can't ignore the past of what works. And a lot did work, but maybe not in ways that we understand as moderns. Maybe the ancients got it a bit wrong as well. And just maybe we'll never be able to understand how some of it works, but certain acts produce certain results.

Get weird. Get results. Get moving!

Theories are built and changed by results. Use all data points. Don't be afraid to consult the Yogini on the Buffalo for advice, or consult your Pinael gland. Whatever works.

Exactly! Tell me about the American Naths. Just started reading DGW so seeing the name is intersting...

Having stumbled upon Gordon's blog and "Neo-Theosophy" I had some kind of "Aha!" moment, that has yet to be defined, and I really enjoyed your take on it, hope this is all going somewhere, sounds like a fun trip.

tveirhrafnar! First: Do you realize how hard that is to spell without copy and pasting?

Second: The ANS is.. strange. We are all strange. And reclusive. And fringe. Like those fuzzy bits on the very end of fringe. But good! I can't tell you a lot about it.. not because of any oaths, but because everyone is such an individual weirdo that we are usually off doing our own thing. It's not an organization as much as a collection of spiritual eccentrics who each have their own groove, but also have Nath practices in common. There is very little traditional about the tradition. Except when we choose to be.

http://nathsociety.org/ Homepage Thus. The Nath Handbook is a good place to start. The mail list has been quiet for a while, and the forums have been down for ages.

Dave! Hello. I hope it goes somewhere as well, as it was a brave thing that HPB did. She had big balls, and not the best anthropology. But there have been far bigger anthropological/historical cock ups in far larger, more serious, and more armed spiritualities than Theosophy. The harm only comes when you can't make out the internal language.

You just have to know what THEY mean by it to navigate. And as always believe your eyes and experience before any map.