Why I Think Shiva Rocks 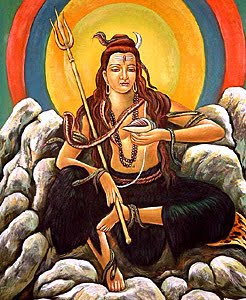 Following up Deb, who followed up Mrs. B, I am going to post about how awesome Shiva is. I've always been into spookier Gods with bad reputations, but the one I've stuck with v. closely is Shiva. We started working together at the Beltane prep that Deb had mentioned her her entry. I had not tried to find a Patron. I simply dug his style and wanted to know more. To say it became very engrossing would be an understatement. We Jived very well. Both enjoyed our share of sex, intoxicants, and music. Both had bad reactions when those we Love are threatened or hurt. Both Love our partners, and occasionally screw up in similar ways.

One of the best things I like about Shiva is that He appreciates EFFORT, not ritual exactness. Don't get me wrong, I am sure there are some seriously bad things that can happen if you botch in the Smashan, but by and large if you do the work, Shiva will help out. Even if it will end well for no one, including you.

There is a story about an acetic who did all sorts of massive penance, and as a result Shiva himself showed up and asked him what boon he wanted. He replied that he wanted to be invincible , and for Shiva to LIVE IN HIS BELLY. Shiva said no prob' bob and hopped on in. Afterward it was Vishnu and Nandhi's job to restore cosmic order, but eventually it all worked out in the end. For everyone. It just sucked at the time.

Shiva plays long ball. He has time because he IS time. Great Mahakala, the destroyer of all. He also doesn't give a shit what class or caste you are, the thing he loves best is honesty and effort.

I also dig that his household is generally on the same page. An honest handful of cooked rice as an offering with humility beats out jewels and fanfare with self importance.

In addition to being a God of sex, drugs, and rock and roll, He's also the Great Yogi, Lord of Beasts, Great Magician, Widower, Husband, Father, Murderer, Destroyer of Ritual, Polluter, Transmuter of Poisons, Auspicious One ,and Primordial Lord of Creation. Many, many snake laced hats. He's also the Primordial Mind, a Face of the One. He streatches from the most subtle to the most gross.

Most of all, He is amazingly kind. And Helpful. And Good. He is a wonderful patron to the out caste, and neglected, the homeless, and the forgotten.

Worship can be as simple as sitting comfortably and saying his Mantra: Om Namah Shivaya. Mantra is the essence of a being in the form of words/sound. Every time you say His Mantra He is present. May that guide your reverence, as it guides mine.
Posted by Mr. J. at Tuesday, November 30, 2010

Shiva hanging out in someone's navel. That's... a unique request, to say the least.